First, click HERE and listen to the inspiring comments of Ben Domenech (a Fox News contributor).  Ben highlights some of the original Pilgrim experiences and reminds us to always be thankful to our God for our many blessings.  (After listening to Ben’s comments, please click on the (x) in the webpage tab at the top of the page.  This will close his video return you to this page.)

The inspiring True Story of Thanksgiving as written by:

The story of the Pilgrims begins in the early part of the seventeenth century. The Church of England under King James I was persecuting anyone and everyone who did not recognize its absolute civil and spiritual authority. The first Pilgrims were Christian rebels.  Those who challenged [King James’] ecclesiastical authority and those who believed strongly in freedom of worship were hunted down, imprisoned, and sometimes executed for their beliefs in England in the 1600s.

A group of separatists, Christians who did not want to buy into the Church of England or live under the rule of King James, first fled to Holland and established a community of themselves there.  After eleven years, about forty of them, having heard about this New World Christopher Columbus had discovered, decided to go.  Forty of them agreed to make a perilous journey to the New World, where [they knew] they would certainly face hardships.  But the reason they did it was so they could “live and worship God according to the dictates of their own consciences” and beliefs.

On August 1, 1620, the Mayflower set sail. It carried 102 passengers, including forty, now known as Pilgrims, led by William Bradford. On the journey, Bradford set up an agreement, a contract that established how they would live once they arrived. The contract set forth “just and equal laws for all members of the new community, irrespective of their religious beliefs,” or political beliefs. Where did the revolutionary ideas expressed in the Mayflower Compact come from?  They came from the Bible.

The Pilgrims were a devoutly religious people completely steeped in the lessons of the Old and New Testaments. They looked to the ancient Israelites for their example. And, because of the biblical precedents set forth in Scripture, “they never doubted that their experiment would work.” They believed in God. They believed they were in the hands of God. As you know, this was no pleasure cruise. The journey to the New World on the tiny (by today’s standards) sailing ship was long and arduous.

There was sickness. There was seasickness. And it was wet.  It was the opposite of anything you think of today as a cruise on the open ocean. When they “landed in New England in November, they found,” according to Bradford’s detailed journal, “a cold, barren, desolate wilderness.” There were no friends to greet them, he wrote. There were no houses to shelter them. There were no inns where they could refresh themselves.  There was nothing.

The sacrifice they had made for freedom was just beginning. During the first winter, half the Pilgrims — including Bradford’s own wife — died of either starvation, sickness, or exposure. They endured that first winter.  When spring finally came, they had, by that time, met the indigenous people, the Indians, and indeed the “Indians taught the settlers how to plant corn, fish for cod and skin beavers” and other animals “for coats.”  But, there wasn’t any prosperity.  They did not yet prosper!  They were still dependent. They were still confused. They were still in a new place, essentially alone among like-minded people.

This is important to understand because this is where modern American history lessons often end. Thanksgiving is explained in some textbooks as a holiday for which the Pilgrims gave thanks to the Indians for saving their lives, rather than what it really was.  That happened, do not misunderstand.  That all happened, but that is not — according to William Bradford’s journal — why they ultimately gave thanks. Here is the part that has been omitted: the original contract that they made on the Mayflower as they were traveling to the New World.  They had to enter that contract “with their merchant-sponsors in London” because they had no money on their own. They needed sponsors. They found merchants in London to sponsor them. The merchants in London made an investment.  As such, the Pilgrims agreed that “everything they produced to go into a common store,” or common account, “and each member of the community was entitled to one common share” in this bank. Out of this, the merchants in London would be repaid until they were paid off.

All the land they cleared and the houses they built belong to the community as well. Everything belonged to everybody, and everybody had one share in it. They were going to distribute it equally.  That was considered to be the epitome of fairness, sharing the hardship burdens and everything like that.  Nobody owned anything.  It was a commune.  It was the forerunner to the communes we saw in the 1960s and 1970s out in California and other parts of the country, and it was complete with organic vegetables, by the way.

What really happened is they “turned loose” the power of a free market after enduring months and months of hardship — first on the Mayflower, then getting settled, and then the failure of the common account from which everybody got the same share. There was no incentive for anybody to do anything.  And as is human nature, some of the Pilgrims were a bunch of lazy twerps, and others busted their rear ends. But it did not matter because even the people that were not very industrious got the same as everyone else. Bradford wrote about how the whole commune structure just was not working.

What Bradford and his community found in the commune system, and I’m going to use basically his own words, “was that the most creative and industrious people had no incentive to work any harder than anyone else.”  While most of the rest of the world has been experimenting with socialism for well over a hundred years — trying to refine it, perfect it, and re-invent it — William Bradford and the Pilgrims decided early on to “scrap it permanently,” because it brought out the worst in human nature, it emphasized laziness, it created resentment.

In every group of people, you have got your self-starters.  You have your hard workers and your industrious people, and you have your lazy twerps and so forth, and in the communal system, there was no difference at the end of the day. For the Pilgrims, the resentment sprang up on both sides. So, Bradford wrote about this. “For this community, it was found to breed much confusion and discontent and retard much employment that would have been to their benefit and comfort.  For young men that were most able and fit for labor and service did repine that they should spend their time and strength to work for other men’s wives and children without any recompense,” without any payment.  That was thought injustice.” Why should you work for other people when you cannot work for yourself?  What is the point? … The Pilgrims found that people could not be expected to do their best work without incentive.

So, what did Bradford’s community try next? They unharnessed the power of good old free enterprise by invoking the undergirding capitalistic principle of private property. Every family was assigned its own plot of land to work and permitted to market its own crops and products. And what was the result?  “This had very good success,” wrote Bradford, “for it made all hands [everybody] industrious, so as much more corn was planted than otherwise would have been.”

In no time, the Pilgrims found they had more food than they could eat themselves. Now, this is where it gets really good if you’re laboring under the misconception that I was (as I was taught in school).  So, they set up trading posts and exchanged goods with the Indians.  And the profits allowed them to pay off their debts to the merchants in London.

Additionally, the Plymouth settlement’s success and prosperity attracted more Europeans and began what came to be known as the ‘Great Puritan Migration.’ The word of the success of the free enterprise Plymouth Colony spread like wildfire; and that began the great migration. Everybody wanted a part of it. There was no mass slaughtering of the Indians; there was no wiping out of the indigenous people.  Eventually (according to William Bradford’s own journal), it unleashed the industriousness of all hands and ended up producing more than they could ever need themselves.

So, trading posts began selling and exchanging things with the Indians — and the Indians, by the way, were very helpful.  Puritan kids had relationships with the children of the Native Americans that they found. This killing of the indigenous people that is talked about occurred much, much, much, much later. And, it had nothing to do with the first Thanksgiving. 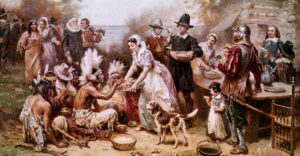 Click HERE to listen again to the inspiring comments of Ben Domenech as he discusses the original Pilgrim experience and the importance of Thanksgiving.

Click HERE to return to my Index of Blog Posts

Welcome to my Blog site. It's a collection of many thoughts that are important to me, and some insights I’ve learned “...along the way.” I think of myself as just a simple man with a testimony of Jesus Christ and the restored Gospel. But, I have lived (and continue to live) an extraordinary and enjoyable life. I've tried to share some highlights here. I have so many good memories. View all posts by saedgar